What are the deductions allowed and not allowed to NRI?

Deductions not allowed to NRIs

How to calculate the residential status?

To calculate the residential status ROR / RNOR / NR or a Resident ... please click on the image and go through few questions to know or Contact us @ 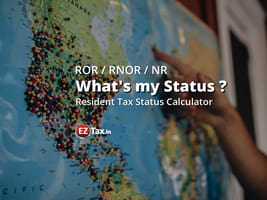 Why ITR should be filed by NRI?
What are the tax exemptions incomes for NRIs?
What is tax treatment to NRI on capital gains and setoff capital gains against the basic exemption limit?

The treatment depends on the type of capital gain

What is DTAA and how to apply DTAA?

In case Non-resident Indians (NRIs) who live abroad but also earn an income in India, there is a possibility that the income arising in India would attract tax in India as well as in the country of the NRI's residence. This means that taxpayer would have to pay tax twice on the same income. To avoid such double payment of tax, income tax provisions were made in the name of Double Tax Avoidance Agreement (DTAA).

The benefits of DTAA are lower withholding tax (tax deducted at source or TDS), exemption from tax, and credits for taxes paid on the double-taxed income that can be encashed at a later date.

India has DTAA with over 80 countries. The major countries with which it has signed the DTAA are the United States of America (USA), the United Kingdom (UK), the UAE, Canada, Australia, Saudi Arabia, Singapore and New Zealand.

DTAA is calculated in 2 ways:

Get to Know More Details Foreign Income IT Filing