Important NRI Tax provisions every NRI should be aware – Part-2

Earlier we have presented the key tax provisions (This article is a Part-2 of two part series. Refer first part @ Important NRI Tax Provisions – Part-1) that every NRI needs to keep in mind to have easy tax compliance in India.

Now we are presenting few more key concepts dealing with NRI taxation as an extension to earlier article. 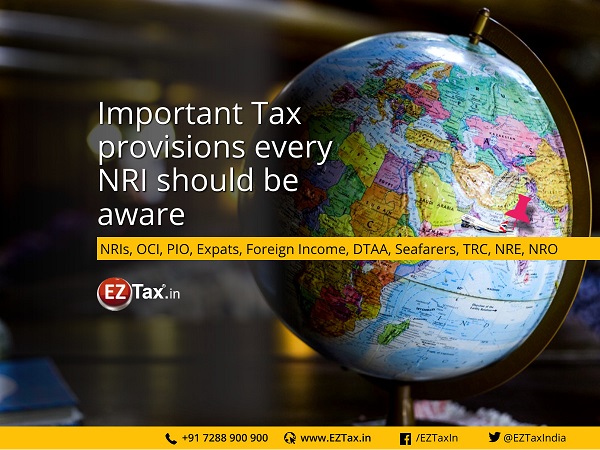 As Indian diaspora progressively spread their wings in investing in to multi-country assets, who may also earn an income in India. In this case, there is a possibility that the income arising in India would attract tax in India as well as in the country of the residence. Which lead to double taxation, that means imposing tax on the same income twice for that individual in both the countries. In order to take care of such situations, the Income Tax act provides double taxation relief agreement for select countries.

The benefits of DTAA are about lowering withholding of tax (TDS), exemption from tax, and credits for taxes paid on the double-taxed income that can be encashed later through filing of their taxes.

India has DTAA agreement with over 80 countries as of today, and are growing every year. The major countries with which it has signed the DTAA are the United States of America (USA), the United Kingdom (UK), UAE, Canada, Australia, Saudi Arabia, Singapore and New Zealand.

If an NRI wants to repatriate overseas earned money back to India or if an individual wants to keep India based earnings in India, one need to open a bank account in India. It can be either NRE or NRO. These accounts can be opened as a joint account with other NRIs or Resident Indians.

a. Non-Resident External Account (NRE): NRE account is opened if an NRI wants to send their overseas earnings into India. This account provides high liquidity to its account holders. The interest earned from NRE accounts are exempt from tax in India. NRE account is freely repatriable (remitted back to originating country).

b. Non-Resident Ordinary Account (NRO): These accounts are designed for those who wish to deposit their earnings In India arising from rent, dividends, salaries etc. Unlike NRE accounts, interest earned from NRO account is taxable according to their individual slab rates. NRO accounts has restricted repatriable compared to NRE accounts

c. What about Savings Account that was already opened in India ? : Many emmigrat to another country while in their active career and may have already opened an Indian Savings Bank Account. For those who haven't closed their Indian Bank account need to close such with in one financial year or as soon as their residency status became Non-resident Indian (NRI) and open NRO or NRE account of their choice.

But there are many practical issues in doing so as not many know how long they are going to stay / live in the host country, due to which the process of closing, opening and moving money, FDs and other instruments in to new Account, and re-opening savings account again when they move-back to India.

The requirement to report foreign assets in the Indian Income Tax return was originally introduced from FY 2011-12 but seeing considerable emphasis from FY 2017-18 onwards where IT Return Questionnaires were modified to include Foreign Tax ID (such as SSN in USA, TIN in UK etc.).

An NRI who returns to India may hold bank accounts, investments, and assets in foreign countries. Every resident other than resident not ordinarily resident (RNOR) in India is required to file income tax return if he holds any asset outside of India.

The assets to be reported in ITR includes foreign bank accounts, financial interest, immovable property (example: house purchased in USA), any other capital assets, signing authority, details of trust in which tax payer is trustee or beneficiary.

As India is growing economically and financially, many Non-Resident Indians are now migrating back to India. It is recommended to have Tax Planning for NRIs who plan to move back to India to Save on Time & Taxes. Few aspects to consider when working with a Tax Consultant are

The presumptive taxation scheme is introduced by the ITD as a relief to small tax payers. As per the provisions of income tax act, certain percentage of their gross total receipts is applied to non-resident income

Certain provisions have been incorporated in the Income Tax act where the total income of certain non-resident is computed based on certain percentage of their gross total receipts.

The presumptive taxable percentage of income defined for various businesses are

Overall, with these important provisions, both NRIs, and expatriates can plan, be compliant with their taxes in India. In addition, GOI, CBDT taking the measures to simplify the overall tax compliance in coming years.