Increased demand for specialised skills and the automation of routine work, industries are in search of freelancers and Gig workers to meet the demands in sourcing the talent. Know more about who is Gig Worker, Economy, how they are taxed in India? 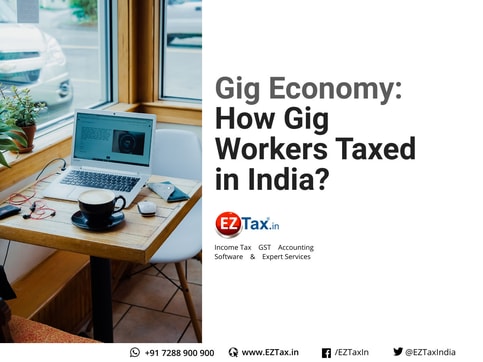 Today, the COVID19 pandemic hit hard on the economy, considerable number of jobs are lost and many at risk. Most start-ups and small businesses are forced to streamline their operations towards more flexible, agile working environments. Hiring Gig workers are the main relief in accomplishing their goals and timelines, remotely and efficiently without any long-term commitments.

The dictionary meaning of Gig is 'a job, that lasts only a short time'.

Gig Worker the term derived in recent history states someone who is independent contractor, temporary worker, online platform worker who can get into a quick formal agreement for a company, enterprise, individual, initiative.

Most engagements for Gig Workers are to do a job on a timebound basis with a clear outcome from his work.

Example: EZTax.in like to offer the content writing work on an online platform to attract potential talent. The work specification is on “How Bitcoins Taxed in India?” to be completed in 2 days must have 900 words and that include latest happenings on this subject.

In this eg. Gig Worker would be the Content Writer, Gig would be to write content with a specialisation in Taxes and exposure to bitcoins and crypto currencies that should be completed within 2 days from the date offering.

A Gig Economy is an economy consists of temporary workers for a short-term engagement without a notable relationship or a contract between an Requester and an Worker as the relationship is bridged by a technology or similar web platform to connect the both.

Gig Economy is a buzzword in 2021 as the COVID19 pandemic stressed the need for shared resources in these toughest economic conditions. Many small and medium businesses may not afford to have full time employment for a seasonal or semi-seasonal jobs anymore.

3. How did the Gig Economy Started?

The Gig economy get its name from Gig as 'one time work / engagement'. The other names that are popular are "shared economy" or "sharing economy", "collaborative economy", that were first attributed to the company Air BNB (online marketplace company for shared rental space to accommodate lodging, vacations in USA).

Gig Economy is nothing new to India as it has been accommodating / offering such temporary, independent, quick jobs all along in the history of India, through it's informal economy which is estimated to be 3-7 times bigger than the formal economy if it all measured as economic activity.

Most economists failed to understand the real economy of India that includes both formal, informal (shared, product, instrument, service exchanged economy where the value is not directly considered in terms of money 'Rupee').

In India, Gig work across urban and rural areas from temporary farm workers to daily-wagers to construction workers, and the household domestic help, the economy is huge in terms of number of person hours and / or the money equivalent. Most such economy is a cash based, product based, service-based exchanges.

Formal Gig Economy in India was highlighted through the efforts from companies like Ola, Uber, Zomato, Oyo who made a great success in shared economy space where a worker is not limited to one job or a specific time.

The Potential for Indian Gig economy could be extremely high that includes.

5. What is considered as a Gig Job?

A Gig Job is a temporary on-demand worker employed on a task-based or a time-based engagement that are typically done by an individual, without any future commitment of work, with a flexibility to work onsite or off-site and flexibility to work any time chosen by the worker for certain jobs.

By law, every resident of India must file their taxes whose taxable income is more than Rs. 2.5 Lakhs and pay the income tax based on the tax brackets defined for a financial year. Consider below

7. How do Gig Workers pay taxes in India?

Refer "Does Gig Workers pay Income Tax in India?" for more comprehensive answer, but based on the income levels, the worker needs to pay the taxes in India either as an advanced tax and or tax payout at the end of the year or at the time of filing the IT Return for that Financial Year.

8. What kind of work done through Gigs?

Many industries switching to micro projects, or tasks that can be offered to wide variety of talent available over the internet to complete them in a more efficient manner. Some of the industries that offer Gigs given below (Sorted by High to Low number of Gigs).

9. What are the examples of the gig Jobs in India?

As India is getting more urbanised, the need for Gig Workers is growing and accommodated through various technology platforms. Many Gigs in the form of Services are already popular and many getting converted into Virtual Services. Below are some of the Gigs sorted in alphabetical order.

10. Type of Industries that include Gig Economy Jobs in India?

Literally there is no single industry that is not experimenting with Gig Economy today, but below are some of the industries that are in the forefront of this wave.

As more companies and businesses reducing their workforce due to difficulties from COVID-19 pandemic and automation, the Gig Economy jobs are a Holy Grail for many. Below are the key benefits from Gig Economy.

Team EZTax.in has long predicted the rise in Gig Economy and advised it's clients to utilise the services where possible, in particularly the Small and Medium Businesses (SMBs)..

Our advise early-COVID19 times as "Possible mass unemployment, layoffs across many countries including India may occur starting from May 2020. Possible shift from a 'Permanent' employment towards an emerging employee-lite modals, similar to target based work-from-anywhere 'Consulting' culture."

Gig Economy is here to stay and continue to lead in micro-small services / projects space for years to come.